, /PRNewswire/ --  (Nasdaq: NBIX) today announced its support of Mental Health Month and commitment to raising awareness of and supporting people living with tardive dyskinesia (TD). Some people living with a mental health condition may also experience TD, an involuntary movement disorder that may develop after a few months of taking certain medications to treat bipolar disorder, depression and schizophrenia.1-3 The uncontrollable movements of TD, which can affect the face, torso and/or other body parts, may be disruptive to people's lives due to the symptoms and impact on their physical, emotional and social well-being.1,2,4 To help raise awareness of TD, the mental health advocacy community and states across the country are recognizing the first full week of May (2-8) as Tardive Dyskinesia Awareness Week for the fourth year in a row. 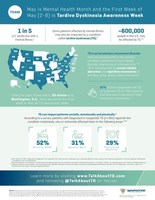 "Most people living with tardive dyskinesia are already living with an underlying mental health condition, and their involuntary movements present additional physical, emotional and social challenges," said , Executive Director of the (MDPC). "The pandemic has significantly affected the mental health of many, especially those living with a mental health condition, making this year's Mental Health Month such an important time to elevate this national conversation. MDPC is proud to recognize Tardive Dyskinesia Awareness Week during Mental Health Month and help support those impacted by this isolating condition."

Impact of Tardive Dyskinesia
A recent survey of patients with diagnosed or suspected TD (n=350) indicated that their movements impacted both their overall mental health and daily activities.5§ More than half of the patients surveyed felt that their mental health has been impacted by their involuntary movements (60%) and over two-thirds of patients reported that they were frustrated by their involuntary movements (69%).† According to the survey, patients with diagnosed or suspected TD reported the condition moderately, very or extremely affected them in the following areas:5‡ more than half said it affected their ability to sleep (51%) and nearly one-third said it impacted their ability to eat and drink (33%) and their ability to speak (30%).

"Tardive dyskinesia may impact people's overall mental health and cause a significant disruption to their daily lives, yet awareness of the condition remains low," said Eiry W. Roberts, M.D., Chief Medical Officer at . "Tardive Dyskinesia Awareness Week is an important time, especially during this already challenging and isolating year, to support those impacted by this burdensome condition by broadening the conversation, sharing resources, and highlighting the importance of seeking a diagnosis and treatment."

As part of commitment to TD education, resources are available at www.TalkAboutTD.com. These resources can help patients and care partners understand TD and recognize its symptoms, request support and have a conversation with their healthcare provider about ways to manage their TD, including treatment options. For more information, follow and join the conservation online by sharing #TDAwarenessWeek.

About Tardive Dyskinesia (TD)
Tardive dyskinesia (TD) is a movement disorder that is characterized by uncontrollable, abnormal and repetitive movements of the face, torso and/or other body parts, which may be disruptive and negatively impact patients. The condition is associated with taking certain kinds of mental health medicines (like antipsychotics) that help control dopamine receptors in the brain. Antipsychotics commonly prescribed to treat mental illnesses such as depression, bipolar disorder, schizophrenia and schizoaffective disorder, and certain medications to treat upset stomach, nausea and vomiting may also cause TD. In patients with TD, these treatments are thought to result in irregular dopamine signaling in a region of the brain that controls movement. The symptoms of TD can be severe and are often persistent and irreversible. TD is estimated to affect approximately 600,000 people in the U.S. For more information, visit www.TalkAboutTD.com.

§ Base: Patient ATU 2021. Target patients (diagnosed TD or suspected TD) n=350
† Responses based on survey question: To what extent is the physical impact of your involuntary movements frustrating? Rating scale: 1 to 5 where 1 means "not at all frustrating," and 5 means "extremely frustrating."
‡ Responses based on survey question: Since first experiencing involuntary movements, how has your ability to perform the following daily activities been affected, if at all? Rating scale: 1 to 5 when 1 means "not affected at all," and 5 means "extremely negatively affected."